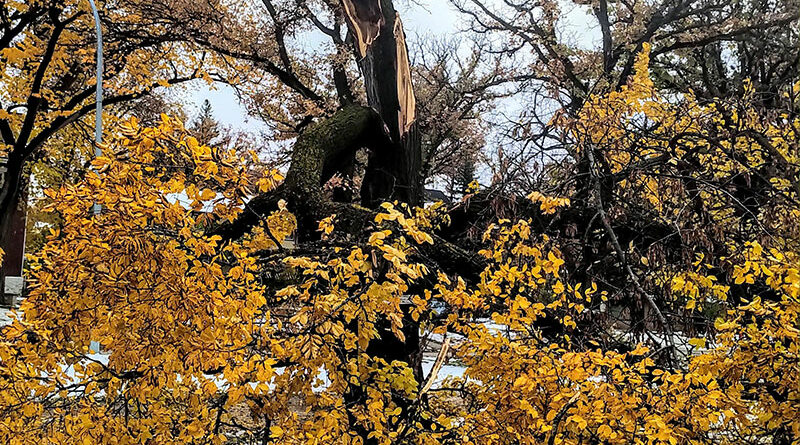 How to deal with your damaged trees after the storm 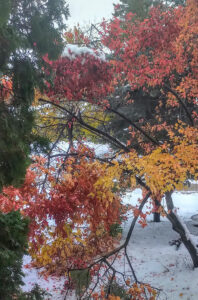 Trees were the major casualty of the sudden snowstorm October 11.

It couldn’t have come at a worse time. The ground was saturated with water from the incessant rains of the past few weeks leaving the roots vulnerable to losing their shallow grip in the clay soils of Winnipeg. Most of our trees’ feeder roots reside in the top six to 12 inches of soil, where they can access oxygen, water and nutrients above the clay base. Even the anchoring perennial roots often extend only a couple of feet into the earth.

During the storm, that tenuous hold on the earth was doubly threatened by high winds and the weight of heavy snow on unfallen leaves. Many trees lost their grip on the earth and toppled to the ground.

Many more, though, had their boughs bent and broken by the water-laden snow clinging to the leaves. Maples, Siberian elms and birch were especially damaged as their soft woods yielded to the strain. Looking at their condition, the word heartbreaking was on many lips. 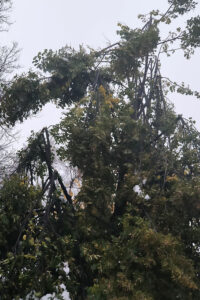 If your trees are damaged from the storm, take a good look at where. Branches snapped in half should be cut all the way back to the next major stem. Be sure to cut just above the collar of the branch, a swelling at the junction of the branch and the main stem. The tools to create the specialized cells (wound wood), that are formed to protect the tree from invasion by insects and disease, reside in the collar, also known as the branch defence zone.

Unlike animals, trees deal with wounds by compartmentalization, or sealing instead of healing: they shed the offending limb, blocking it off from nutrition, and put their energies into their meristems, the growth tips. Do not leave stubs, created by cutting mid branch. This wood will attract pathogens and insects leading to decay, possibly infecting the rest of the tree, even causing death.

If the storm split your tree trunk, you may be able to rescue it by using a soft tie to bring the damaged parts back to an upright positon. Binding torn parts of the tree together may work as long as two parts have a connection to the main stem or are able to get nutrition some way. You could use strong tape to accomplish this, but be sure to as some protection between the tape and the bark if the bark is thin. For those trees whose branches have just been badly bent, the trees will work out how to get uprigth for themselves as they reach toward the sunlight.

There is little more you can do after this. After cleaning up the broken and damaged limbs off your tree, making any small repairs or cutting away stripped bark, leave the tree to do what it must. Do not paint open wounds. This can interfere with the tree’s natural ability to build its wound wood. Next spring, pay careful attention to your tree’s awakening. The tree doesn’t need outside competition right now. Wash down limbs with a sharp spray from your garden hose to dislodge any overwintering insects and eggs. You may wish to fertilize. 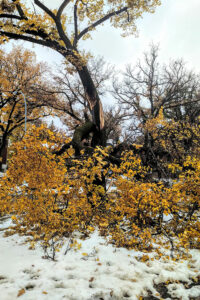 It has already been a harsh year for our woody friends: First, they were attacked by a myriad of sucking insects. Then drought affected them most of the summer – you could see the browning tips of their leaves. This was followed by heavy rainfall which soaked the ground they were standing in, depriving them of oxygen from the soil. While it is true that plants use photosynthesis to make oxygen in their leaves and stems, it is also true that their roots need oxygen from their environment in the soil in order to stay alive. When the soil is too wet, the trees are smothered – downed. When the soil is too dry, the leaves close their stomata, the breathing pores on their leaves, to preserve moisture. This slows growth and can eventually kill a tree.

This would be an ideal time to think about planting some new trees. CN Rail, celebrating is 100th birthday, has pledged a donation of $1 million through Tree Canada to plant trees around the city. Trees Winnipeg offers tree packages along with planting and care instructions. The Mayor has issued a challenge to citizens to plant a million trees over the next few years. The city manager of Parks and Open Spaces has been charged with the responsibility of figuring out how to help manage this on public lands, but you can do your part by adding a tree or two to your back yard.

Damaged trees after the storm

By Dorothy Dobbie, former chair of Trees Winnipeg and the former chair of Tree Canada, where she is still on the board. She can be heard on CJNU 93.7 FM (BellMTS Channel 725 and cjnu.ca) every Sunday morning at 8:00. She publishes Manitoba Gardener magazine. 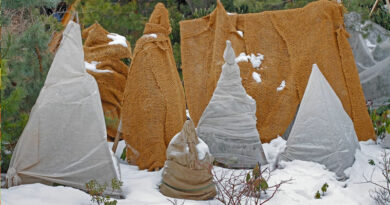 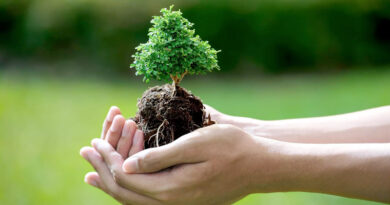 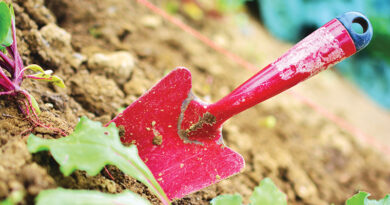