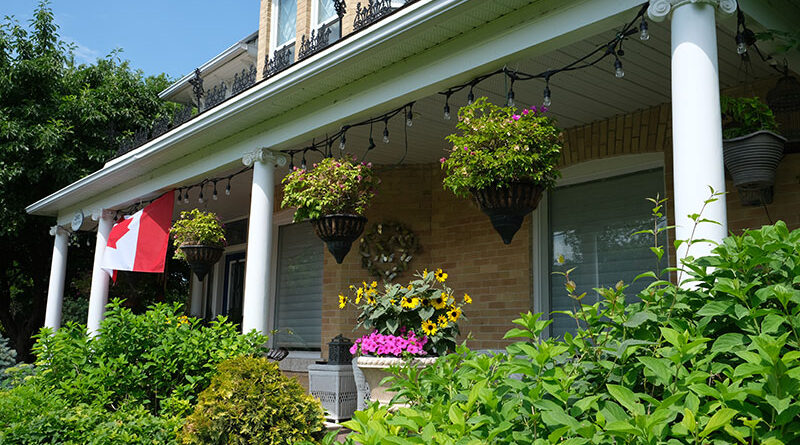 By Dorothy Dobbie
Photos by Dorothy and Shauna Dobbie

Doyle Piwniuk is a tree man. The colour, texture and form of trees inspire him, particularly during the autumn changes when some maples take on a dress of crimson. In Manitoba, where gold is the colour of the season, red in the landscape is a novelty. It shows so well against the dark green cedars and black spruce trees that populate the area.

Virden, a small town in Manitoba’s oil patch just off the Trans Canada Highway on the way to Regina, is where Doyle lives in a century-old house with his wife, Michelle, and two young adult kids, Aiden and Jillian.

Somehow, he manages to maintain his lovely garden even though he spends months every year in Winnipeg as the Deputy Speaker of the Legislature. And, as any rural MLA knows, constituency work is about travelling around the riding, staying in touch with the needs of his constituents, and making sure they know he is on top of current events in their communities. Not that this phases Doyle. He has endless energy and a refreshing zest for life.

He likes to plant his trees in clusters that show off their colour and shape, setting pyramidal cedars against globe forms and the spreading branches of nesting spruce. As contrast, he might plant a sugar maple in the centre so that, come fall, there is a symphony of colour to admire. Throughout his property, among the 41 trees he has planted, there are multiples of several species of sugar maples: ‘Autumn Spire’ red maple, ‘Northwood Red’ maple, ‘Lord Selkirk’ and ‘Rocky Mountain’ sugar maples, and Korean maple, which he says is hardier than the coveted Japanese maple.

He calls himself more of a landscaper than a gardener, but he could teach most landscapers a thing or two about plants. For example, he uses masses of low growing, golden sedum to set off back-to-back ponds, always punctuated by his first love, woody plants such as dwarf globe cedar, which he keeps neatly trimmed but not rigidly pruned.

Doyle’s tree love is not limited to maples and spruce. Smitten with their brilliant chartreuse colour, he has planted 13 ‘Yellow Ribbon’ cedars. He has a Manchurian ash, a pin oak, a hackberry, and honeysuckle shrubs. False spirea cuddles the pizza oven on one side with blue spruce and golden cedar on the other side, all backed by a thick planting of Virginia creeper. In one sheltered spot is his prize: a young Gingko biloba, which he planted 16 years ago in memory of his father who passed away from cancer.

Hailed as the living fossil tree because it has been unchanged for more than 200 million years, gingkoes grow slowly but can reach from 1,000 to 3,000 years old under the right conditions. Its large, fan-shaped leaves turn golden yellow in fall, sometimes in stages with bands of gold and green. A happy gingko will reach 50 to 90 feet tall with a spread of 30 to 40 feet and it is reasonably hardy to Zone 4. In Doyle’s garden, it has just begun its long journey. “The first five years were difficult. There was a lot of winter kill,” he says. “The last five years the tree has adapted to our climate. It is now over 9 feet tall.”  Doyle’s tender care and sheltered yard has no doubt contributed to the success.

Doyle uses trees in a myriad of ways: planted in pleasing groups as ornamental features in the front garden to serve as a dense privacy shield between his property and that of the neighbour (who appreciates this as much as Doyle does), and a backdrop to day to day living in the beautifully designed courtyard at the back of his gracious old, brick house. “The house was bult in 1905 by William Thomas Manser who also built the Auditorium Theater in Virden in 1911,” he says with pride.

In its day, the Virden Auditorium was the centre for the performing arts in western Manitoba, according to Gordon Goldsborough of the Manitoba Historical Society.  It was built, as was Doyle’s house, of a local brick made in Virden.  In Doyle’s yard, which heavily features this brick, the master mason was his friend Rudy Leroy. He also constructed the pizza oven, the outdoor kitchen, and the huge stone fireplace that Doyle and Michelle have surrounded by comfortable couches and easy chairs. The yellow brick is set off by planters and ornamental features in blue, deepening in some cases to cobalt blue.

One end of the brick paved yard is anchored by a three-season greenhouse set on a stone foundation that Rudy built, with a little help from Doyle and Aiden, this past season to replace the previous wooden base.

Exotics such a hibiscus and bougainvillea add punches of colour and enhance the tropical feeling promoted by the lush green on the setting.

At the other end of the courtyard, the entry point, is a stunning arched oaken door. This was bult by a local artisan, Robert Heath, originally from England. The door is set between two brick pillars, built by Rudy, and highlighted with an inset of cobalt blue tile.

The entire garden offers a pleasing journey with different moods that change from “room” to “room”, each with its own special personality and highlights.

The garden is a lot like Doyle, filled with unexpected insights, delightful surprises and lots of warmth and good humour. 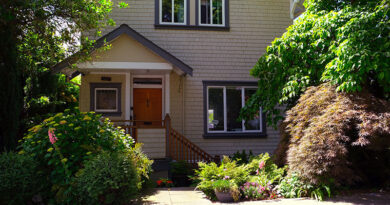 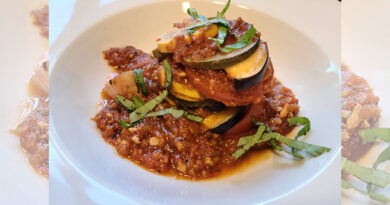