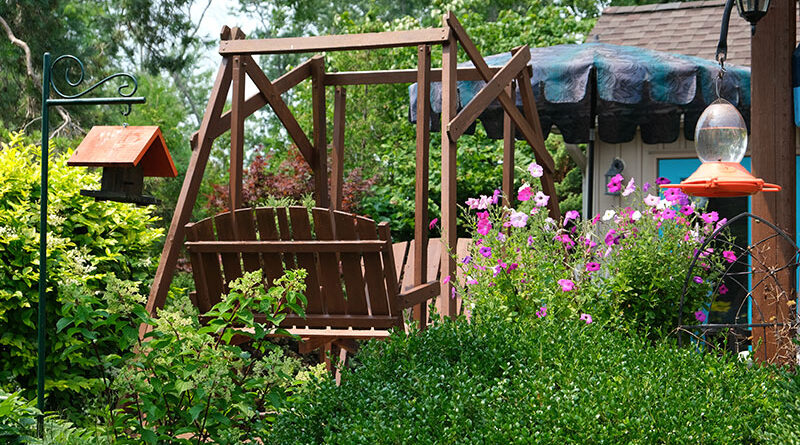 Pete Mowat is living the dream. Retired from Canada Post, he has the time, the space and the energy to garden everywhere on his two acres of land on the shores of Lake Erie. With a lifetime of experience, first as a vegetable gardener on his family farm, and a landscape diploma under his belt (he studied in service to his hobby) Pete knows his way around a garden with a spade.

When he left home forty-odd years ago, he lived in an apartment in a duplex in Hamilton. “There was very little lawn around it, and I thought I would turn some of it into garden just to make it look nicer, so that’s kind of when I actually really started into it.”

Then he moved to his own house and, by the time he sold it nine years later, there was no lawn in the back. It was all gardens and ponds—which were not extremely popular at the time, though he managed to find plants to fill and surround it. He did the same at the larger house he moved to, then he sold it 10 years after moving in.

The land he gardens on is a part of his father’s farm. He took over a couple of acres in 2000, and about six years later he built a house on the land, on the edge of Selkirk, Ontario, which is now an area full of cottages. “I hadn’t planned on making so much garden because I didn’t want the work involved. But that went out the window,” he chuckles wryly.

The time he spends maintaining the space is mostly used on mowing the lawn (he uses a push mower), weeding, and fixing what the winds blow down. He doesn’t water much, except for the vegetable garden. He doesn’t bother much with insect pests; something that gets too troublesome will be dispatched with insecticidal soap and slugs get the ammonia treatment.

Of course, there are always new items to add to the growing list of growing things. Pete doesn’t really need to visit garden centres anymore because most of his new plants come from his old ones as divisions or through seeds. He fills the space with flowers, vegetables and trees, as well as ponds, and huge collection of stuff he’s picked up or been gifted, artfully arranged. Three aluminum tea kettles placed side by side. Decommissioned bicycles painted black from tip to toe. A signpost, one of those ones with names on arrows pointing in different directions; his says “Port Colbourne”, “Selkirk”, “Tillsonburg” and… “Disciple Camp Ground”? Apparently, it’s at the end of the road he lives on. He found it in a ditch.

There is a rowboat, full of cactuses and sedums, run aground in a gully of river rock. A kind of political comment, this dry-land planting in and around an old water-worthy vessel? Maybe, but talking to him, he doesn’t seem like the type. The river rock runs under a bridge and down to a pond, with thickets of reeds growing up here and there.

Incredibly, except for some very heavy lifting, he does it all on his own. A friend—Nancy Connor—comes by to help him out sometimes, but mostly he does it solo. Pulling weeds, mowing the lawn, watering new plants and the vegetable garden. Harvesting the fruits and veg, some of which he gives to friends (hoping for a pie in return!). His harvest gets eaten, frozen, or left in the ground in the case of carrots.

Pete’s vegetable garden is almost all direct seeded. For tomatoes, he’ll bury a whole tomato in the fall and when seedlings sprout in the spring, he’ll separate them and move them around. Forget your red cups and heat mats and grow lights. (Of course, in an area that is frost-free for over 160 days, this works; I wouldn’t try it on the Prairies.)

Near the house there’s a collection of giant plants: aruncus, cannas and elephant ears jostle together to make you feel tiny. Look behind you and there are some Jerusalem artichokes reaching for the sky. These all loom over an arbour being swallowed by a wisteria vine. Things grow big and healthy in this garden.

Family and friends come by to enjoy the beauty, of course, though Pete wouldn’t mind sharing it some more. He’s had a couple of garden clubs stop by, then the pandemic put a halt to everything. It is a spot full of wonders to explore and the surprises are endless—there is a dinosaur! I won’t be surprised if his garden gets many, many visits once the garden clubs find him. 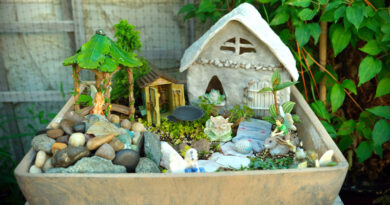 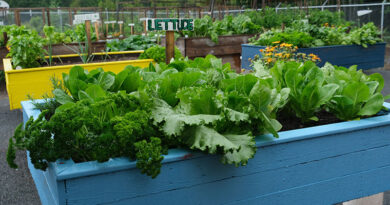