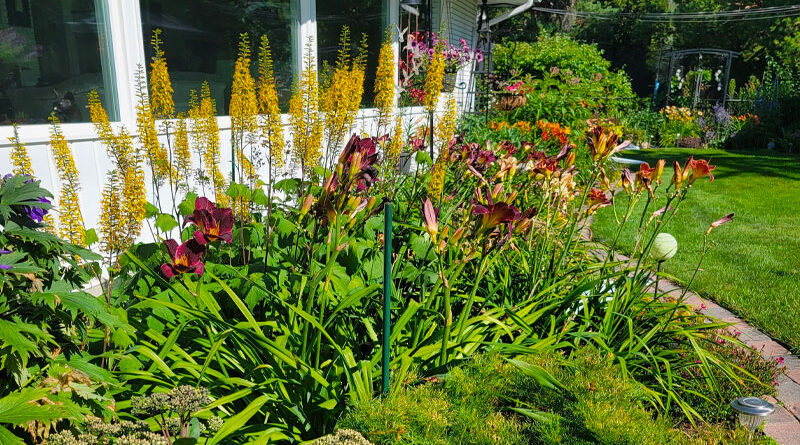 When my husband Robert Wrigley and I moved into our home in Winnipeg, landscaping the garden was minimal. Numerous large trees and shrubs, largely planted at random, and looking rather ragged from competition and old age, cast shade over both front and back yards, leaving little exposure for floral gardens. Thirty-five years later, and with some strategic tree and shrub removal, the sun now has free play to almost all areas of the yards, and flower beds adorn the pathways that meander around all sides of the home. New features, such as a wooden deck, a richly coloured stone patio, a tiled gazebo, and a refurbished ‘Florida room,’ offer a variety of places to lounge, read and enjoy the vistas and serenity of the home, far from the noise of traffic, and offering choices of sun or shade. A new wood-fired pizza oven in one corner has already garnered a waiting list of requests from hungry friends. A 5-foot-high Inuksuk, which Robert constructed out of local rocks, adds interest even when partially covered with snow.

Neither of us described ourselves as gardeners when we moved in. I am a long-time cellist with the Winnipeg Symphony Orchestra, while Robert, a retired ecologist, held positions of Museum Director at the Manitoba Museum, founding Director of the Oak Hammock Marsh Interpretive Centre, and Curator of the Assiniboine Park Zoo. When I joined the Board of Directors of the WSO, Chairperson Dorothy Dobbie appointed me Chair of the Garden Soirée Committee, which raised funds annually by arranging public viewing of diverse gardens selected by Dorothy. Observing the diversity of flora, plus inspiration by the many gardeners I met each year, provided the catalysts I needed to begin developing my own gardens, first in the back yard, and eventually all around the home. I also regularly accompanied my sister Karen Dahl (a prolific gardener) to greenhouses in Winnipeg and the surrounding towns. Lacking confidence about which plants to purchase, I routinely followed Karen’s advice — whatever she put in her plant trolley, I put in mine. Robert’s botanical interests were focused on raising succulent plants, an extensive collection he later donated to the Assiniboine Park Conservatory in Winnipeg.

Over the years, I envisioned additional garden spaces featuring new flower varieties that demanded inclusion in the gardens. In compliance with his new head-gardener instructions, Robert diligently dug up sod, wheelbarrowed in countless yards of topsoil, sand and sheep manure, laid over 2000 paving stones, and helped construct the new patio and gazebo. The latter structure turned a weed-covered corner into the yard’s prime sitting area, offering the best view of the expanded garden. To increase our viewing pleasure of the front yard, while sitting in the glass-enclosed patio, we now have two raised gardens. A long brick garden bed is generally host to gayly coloured petunias. The second, bounded by thick blocks of beautiful white stone, displays new varieties of annuals and perennials, backed by eye-catching sprigs of Russian sage and bright yellow ‘Sunstruck’ false sunflowers. The result is now a landscaped property that the former owners would not recognize.

The current backyard garden is actually a revised version, since over a decade ago, we installed a geothermal heating and cooling system, which necessitated the elimination of the existing lawn and garden beds during excavation for a network of polyethylene ground loops involving 30 drill holes, each descending to a depth of up to 50 feet. Fuel savings, plus the recent addition of 32 solar panels on the roof, now qualify the home as highly energy efficient, even with the large number of windows.

I like to acquire varieties of plants with musically themed names, such as ‘Oscar Peter-son’ rose, ‘Beverly Sills’ iris, ‘Rock and Roll’ and ‘Tango’ astilbes, and ‘Salieri’ daylily, as well as plants with black or dark purple flowers, such as ‘Midnight Madness’ iris and ‘Armageddon’ daylily. Stands of swaying Joe Pye weed attract bees, hoverflies and painted lady butterflies, dill attracts black swallowtails, and milkweed provides food for monarchs. Several large pots are reserved for herbs, which are snipped regularly for pizzas and other meals. The gazebo and garden paths are appointed with Greco-Roman and music-related busts, including a Beethoven, whose coiffure is carved out at the top to accept a potted plant. Also scattered around the garden and gazebo are comical metal sculptures of a goat, sheep, peafowl, snail, and a frog on a spring, which visitors cannot resist twisting to watch it shimmy. Flags (five exhibited at a time) hanging along the backyard fence contribute additional interest and colour, and represent places where we have lived or visited repeatedly.

Not satisfied with the spaces offered by seven garden areas, I decided to point my green thumb in the direction of pot-scaping. Numbering at one time 85 pots of flowers, these have been reduced to 50, although I compensated for this by installing 21 hanging bas-kets. To enjoy the garden view after sundown, I added 60 solar-powered lights along the garden pathways, in pots, and in the ceiling of the gazebo, which cast an inviting glow throughout the yard. We decided recently to secure the backyard gardens from visiting cottontails and white-tailed deer by installing wire and steel fences and gates. While these herbivores can still nibble on sweet-potato and flowering plants in the two raised gardens in the front yard, plants in the backyard are finally safe. As all gardeners know, there is always another project around the corner, and new varieties of plants to introduce into the garden landscape, helping to create a symphony of flowers. p 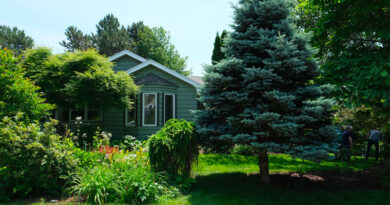 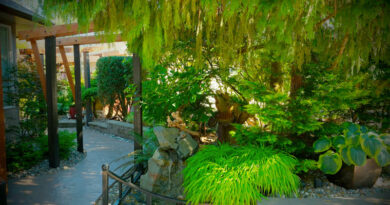 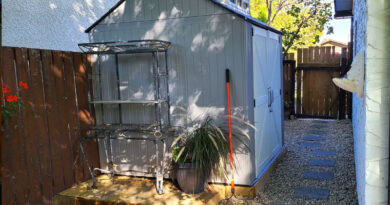