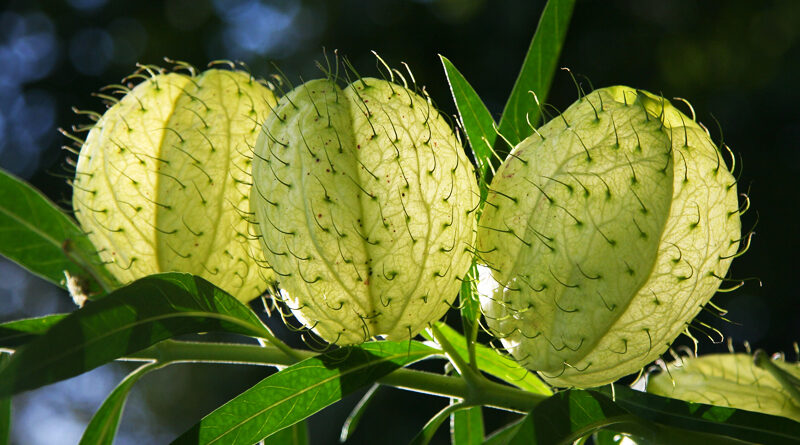 It isn’t often that you grow a plant mainly for its seed heads, but some are so spectacular, you may want to do just that.

Take the hairy balls plant. No, I am not joking. That’s its name. This amazing milkweed, Gomphocarpus physocarpus (formerly Asclepias physocarpa), is a tall, weedy looking plant with clusters of white flowers hanging out among the narrow leaves of the host. It is nothing much to look at in this immature stage, but once the flowers go to seed, look out!  The flower clusters explode into baseball-sized seed heads covered with spiny hairs.

Also known as the balloon plant, bishop’s balls, and elephant balls, this plant can grow six feet tall. The seeds heads will burst open when ripe, throwing the fuzzy seeds far and wide. Start seeds indoors in winter to be sure the plant reaches maturity. And yes, hairy balls will host the monarch butterfly which also appreciates its nectar.

People use the seed stalks in ornamental arrangements.

Regular milkweeds have a quite different seed head. Their much showier display of umbels in pink, white or orange flowers morph into slender tubes containing silvery strands of silk to help the seed on its way when released from the pod. Milkweed floss is used as insulation in lightweight life jackets and flotation devices because it can support 30 times its own weight. It is being introduced as insulation in winter fashion by a Quebec company for its heat retention value. It is also hypoallergenic.

We don’t grow allium for their seed heads but we are grateful for them when the flowers have faded. All allium leave a spherical ball with the seed heads at the ends of slender filaments. The seed head remains attractive until they turn brown and ripen and their fruit falls. The bigger the seed head, the more interesting an impression it leaves in the garden. Some people pick them when still green and then spray paint them white or silver in preparation as decorations for Christmas. The giant Allium schubertii is the largest and showiest one.

There are few flowers lovelier than poppies, which also produce a magic seed heads. When the marble-sized pods are ripe, you can sprinkle the poppy seeds like pepper from their ornamental heads. These too, are wonderful additions to the ornamental arrangement. The seeds, eaten for years in cakes and on bread products, actually do contain tiny amounts of opiates – not enough to make you high unless you eat handfuls, but enough perhaps to make you fail a drug test! The heavy-duty morphine comes from the sap which is much more potent. While planting Papaver somniferum, the opium poppy, is illegal south of the border, you can feel free to have these beauties in your back – or your front – yard in Canada.

Nigella, or love-in-a-mist, is a seldom planted annual. This delightful little flower can be grown from seed and will produce in a few weeks. Sow some seeds in fall for an early show and sow as many as three crops a year to have flowers throughout the season. It also will self-sow and continue to appear year after year. The flower is very pretty, the petals nested in a network of lacy greenery. The seed pod is just as interesting as the flower turns into a little balloon-like vessel with five interesting “antenna” rising from the top. Nigella is an ideal cutting flower, along with cosmos and bachelor buttons, but this one makes it hard to choose between the flower in bloom or the seed pod. Some people combine the two in a single bouquet.

There are many more common flowers in the garden that have an interesting life after blooming. Our native clematis has lovely, silky seed heads / pods that look like shimmering butterflies on the vine. Let your peony go to seed and marvel at the end creation of several fat pods arranged in a circle. Canna produces racemes of bristly pods with a little beak on the end of each. Anemone canadensis turns in to a cottony puffball and the pasque flower sends up smoky plumes to protect the next generation.

In our eagerness to have colour and tidy gardens, we often deadhead before any of this magic is in evidence. Be a little patient and look closer this summer. Cut some of the seeds heads for a fall basket everyone will envy.

And don’t forget the free seed heads of weedy plants on the road allowance! 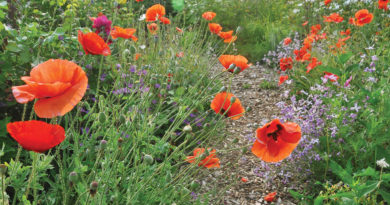 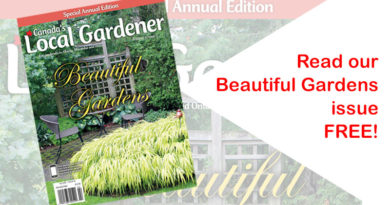